Associated with the sun in ancient Egypt and frequently used in jewellery and the decorative arts in the ancient world. Cornelian / Carnelian artifacts were recovered during excavations of Bronze age Minoan civilization at Knossos Crete.

The jewellers gemstone from antiquity called ‘cornelian’ is also more widely known as carnelian in the USA and many countries. Both terminologies are correct of course and they are the same gemstone. The Oxford English Dictionary refers to ‘cornelian’ as originating from the Mediaeval Latin word Corneolus (meaning similar to the Cornel Cherry) but at some stage in history the word become popularised as Carnelian (from Carne = Meat coloured!) Call us old fashioned or maybe we have read too much into the derivation but we prefer the association with cherry red and the original etymology so refer to our gemstones as cornelian rather than carnelian.

Cornelian is highly recommended as suitable for seal engraving as it is generally a hard stone of high and consistent density. Excellent quality engravings can be achieved on carnelian and they are less likely to crack if subject to shock impact. 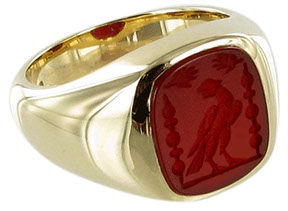 Example of a cushion shaped cornelian ring, seal engraved with a family crest.

Cornelian stones are usually quite consistent in colour and tend to look like a terracotta / cherry red although some cornelian can be a lighter orange sort of red.

It is always difficult to tell from our photographs on the site due to the light bouncing off and through the stone when we photograph, also the colour settings on anyone’s computer might be different so please be aware that the stone in your ring might be a slightly different colour red than the ones shown on our site. 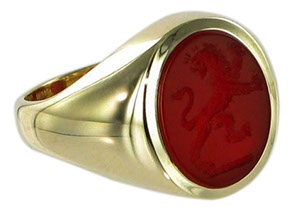 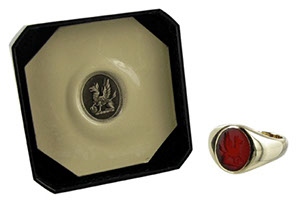 Example of a cornelian ring seal engraved with a griffon crest.